The work reminder is nice but Marc wishes it wasn’t at 6 am! He wakes with time to tend his small garden and start reading the book on gardening.

Time to go to work! Marc isn’t keen on his uniform but it is what it is. Recalling his mom mentioning getting caught in downpours without her umbrella, Marc makes sure he grabs one before heading out. 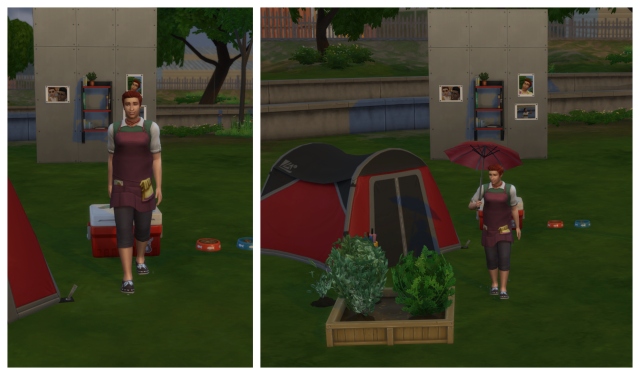 First day on the job and it happens to be the Boss’ birthday! YIKES!! Marc has no clue as to what would be an acceptable gift and decides to work with what’s he got. Fortunately, his boss is really impressed with his skill and ingenuity!

The light drizzle is replaced by something a bit heavier, causing the stray cats to seek shelter in Marc’s bathroom. He’s not home so they’re sure he won’t mind!

It’s a good thing Marc isn’t here … Look at who is not in school today! Mike appears to be taking a Rain Day. 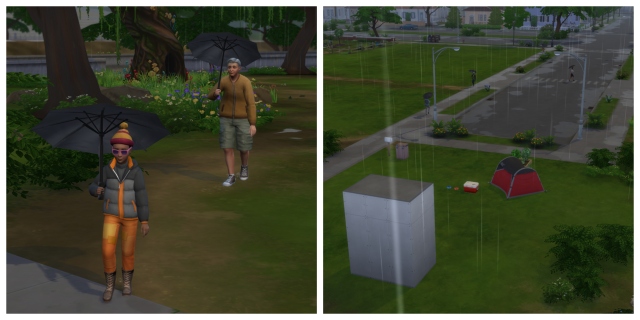 Ka-boom! The first strike hit the ground and look at how close it is to Marc’s place! (The two images show it from different angles). Ka-boom! At least the second strike left a present for Marc.

Marc collects the Plumbite and slips in the mud on his way to shower off the day’s grime. He definitely needs a shower now! Shoo! “A little privacy if you please!” 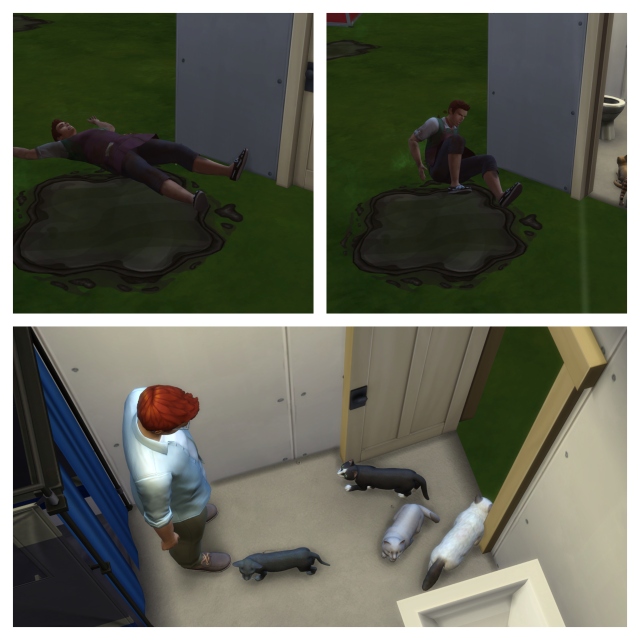 Not sure when it happened … but Marc broke his umbrella and needed to grab another one.

The rain had stopped by the time he finished showering so Marc quickly plants a few things. (The last item is the Cowplant Berry!)

Then the rain returns …

Too wet to go collecting or fishing so Marc decides this would be a good time to read the Wilderness Journal magazine in his tent. Ka-boom! :cloud_lightning: Lightning crackles overhead but doesn’t seem to hit anything.

Or so he thought. It destroyed the umbrella stand! Even though Marc is IN a tent, he feels as if he’s still out in the rain and is quite uncomfortable. The lightning storm is also making him tense. Really tense.

Ghost Daisy contacts him about going to the park. While Marc would love to go, he declines due to inclement weather. (In reality, challenge travel restrictions kept him from going but I couldn’t resist peeking to see who might go if he could. Caleb is almost unrecognizable in glasses and a turban. But … LOOK! … Mike had a birthday and is now a teenager!)

Ka-boom! A strike hits near the mailbox but there doesn’t seem to be any damage when Marc peeked outside his tent, thank goodness.

However, it is enough of a concern so he runs to the bathroom and calls to check on Mike. Hearing that his brother is safe eased one of his worries.

Marc heads back to his tent in order to get some shut-eye but it was not meant to be. Ka-boom! Goodbye, tent!!

The stray cats and Marc seek shelter together. Marc drinks a Sleep Replacement Potion because it’s quite obvious he won’t be sleeping a wink tonight! 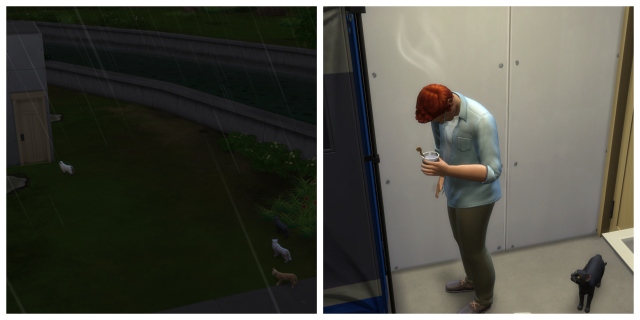 What a difference a day makes! Things started off on a good note but soon turned sour. Marc broke two umbrellas in this storm and … lost both the umbrella stand & his tent due to lightning strikes. But, hey, he now has enough money to do a bit of construction once the rain stops and the mud puddles dissipate.

Thank YOU for reading & leaving a comment. Both are awe-sim!!! Cancel reply

This site uses Akismet to reduce spam. Learn how your comment data is processed.

This site is not endorsed by or affiliated with Electronic Arts, Maxis or The Sims Studio. Trademarks are the property of their respective owners.