The contestants begin waking around 8:30. Some are well-rested and others act like they hadn’t slept at all.
(I decided that once everyone wakes up and takes care of their most dire needs, they can go on their outing. The game decided otherwise! Several ** looks pointedly at Mikaela & Jermaine** wake before their time with energy levels drastically low and “are strongly encouraged” to take naps before getting distracted by anything else.)

Excitement begins building as each wonders where they are going on their first leisure day. Possibilities fill their minds and pepper their conversations as each go about their morning routines.

Greta calls the Repair Service number they were given during their brief orientation and is pleasantly surprised by how fast someone is being sent their way.

Veer Chauhan arrives at the scheduled time and decides to fix the coffeemaker before taking on the sink that is spewing water everywhere. Less chance of an electrocution this way, Greta guesses.

Kelsie thanks him and isn’t sure if he is embarrassed by the contestants running around in their sleepwear or if something else is bothering him but he leaves before she can find out.

Repairs done means it is time …
Time to go on their outing!
(To see how location and activities are selected, please read House Rules.)

On the ride over, their moderator hands out itineraries highlighting a few Places of Interest but one catches everyone’s attention and the driver is given the address.

The contestants arrive at their destination a little before noon.
What a lively bustling city San Myshuno is!!

For movers, shakers and sims in the know
The Fashion District is where they like to go.

Residents and visitors rave about this particular “stop”
They’re talking about karaoke at Planet Honey Pop!

The mixologist, Eliza Pancakes, does her best to keep up with all of the orders being tossed her way.

Mikaela isn’t quite sure how she feels about a “talking toilet”.

Some wait their turn at the karaoke machine while others step outside to enjoy the live music.

The extra servings of bread rolls (Jermaine’s order) and Pita & Mushroom Tapas (Mikaela’s order) are placed in doggie bags so contestants can enjoy these later.

Erick grabs the karaoke machine mic before Otis and the observant will see what others think of his singing skill (or lack thereof!).

Contestants enjoy meeting others and are careful not to give away any details about the season.

Otis enjoys his time on stage. Fortunately, he is unable to hear Erick asking if he is autotuned. Mikaela wonders if the competitive green-eyed monster grows strong within #TeamErick.

Quinton orders a Banh Mi in the hopes of striking a conversation with the pretty lady at the table but fate doesn’t smile his way. He then tries to position himself for conversation after dropping off a tip but that doesn’t work out either. Instead of letting any of this bother him, he opts to enjoy other views.

Erick moseys behind the bar and offers to fix Brittani a drink. Mikaela takes the opportunity to try and wake herself up but even the odd yet refreshing bathroom mist does little to add pep to her step.

Poor Jermaine! He falls to the floor for twenty winks before he can even take a step to find a more suitable napping spot.

3:30 PM
The contestants are having fun but realize the competition is taking its toll: long hours during the day followed by nights of not getting fully rested. They collectively decide to head home.

The tired take naps while those with a bit more energy quietly entertain themselves. 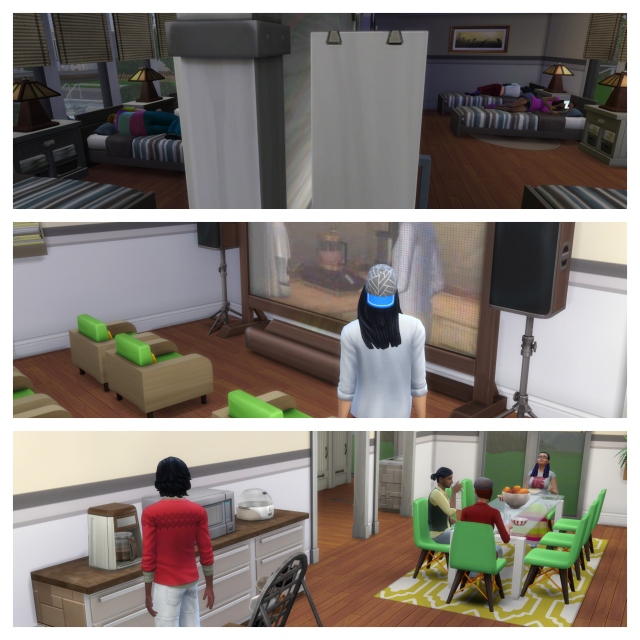 Greta is heading to the outside trashcan when she decides to hire a maid (one time) in order to fully take advantage of it being a day of leisure. Unfortunately, the call happens after the cutoff period so the maid will arrive by 11 AM on Thursday.

Meanwhile …
Otis mops up the puddle and isn’t happy with the choice he made.

He receives the moodlet: Eww, Gross! (from mopping a puddle)
Description: Blech. This is just creepy.
(Otis is the first sim I’ve played that has the Squeamish trait and he makes such interesting faces!)

The evening passes with rounds of quiet relaxation (in bed and out) as well as eating in shifts.

The night begins winding down and most of the contestants head off to bed.

Erick isn’t tired but playing cards on his own doesn’t appeal so he pops in a movie. Hmm … maybe “Sims of the Dead” isn’t the best choice when a sim is up late at night. Alone.

(The choices sims make when left up to their own devices is quite entertaining!)

Since a few of them had a long day, it will be interesting to see what the following Leisure Day brings.
Day 5

As always, thank YOU for reading! Feel free to leave a comment. Cancel reply

This site uses Akismet to reduce spam. Learn how your comment data is processed.

This site is not endorsed by or affiliated with Electronic Arts, Maxis or The Sims Studio. Trademarks are the property of their respective owners.